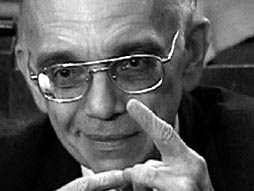 Juan Cristóbal says: - The well-deserved, near-universal praise heaped on Venezuela's Youth Orchestra Program ("El Sistema") is a source of pride for all Venezuelans. And yet, reading the latest article to sing its praises, this time courtesy of The Toronto Star, I was left wondering: what is it about El Sistema that makes it so succesful?

Of course, Abreu is mortal, and we would be selling the program short if we were to place its success on his shoulders, condemning it to oblivion once he is not there anymore. It's the parents, the musicians, the government - they all keep the train humming along.

But through it all, the fact is that Abreu has been persistent, leading the ship since the mid-70s.

It's hard to imagine El Sistema having this kind of impact without someone there, day in and day out, with a vision, navigating the perilous waters of political turmoil, oil-price shocks and a society that is, at times, at war with itself.

Abreu never set out to make this program for political gain. He doesn't appear to have wanted it as publicity, or to gain fame, or to boast in international forums. In his own words, "those of us who have been involved from the start were never really aware of what we were doing."

All he set out to do was create orchestras.

That concentrated focus has, almost miraculously, allowed him to gain the favor of governments left and right. He has sold his foundation as a Venezuelan institution, and has worked to resist being framed by either side in the current political squabbles. He has involved the communities, the parents and the local authorities, making them all have a stake in the outcome.

El Sistema could only work because of what it is not: a government program. Although the government supplies much of the funding, and the current administration has shamelessly tried to appropriate the fruits of their labor, El Sistema is not the product of the State.

It's the product of a single man's vision and the tireless work of hundreds of thousands of ordinary Venezuelans. It is not the fruit of some politician's imagination. It is not a three-headed bureaucracy run by a random army general who is replaced every six months. It's not a cash-distribution scheme concocted on the fly to help win an election.

This isn't to say that government social programs can't work. They can, and do. It's government programs run by the Venezuelan state which have proven to be ineffective and inefficient. They could be made to work, as long as they learn some lessons from successful experiences such as El Sistema.

Think about it:
All those things make El Sistema work. All those things are lacking in Venezuela's Misiones. Is it any wonder The Toronto Star is not raving about Misión Ribas?
by Juan Cristobal