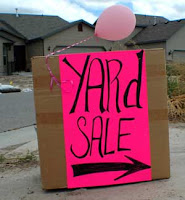 Juan Cristóbal says: In what the government is hailing as a positive development, the Chávez administration has just "sold" $5 billion worth of bonds in order to ease pressure on the black market exchange rate. The auction was hailed as a huge success - reports indicate demand for the papers was more than twice what was available, the black market rate is going down, and everyone is happy.

Funny, because when you really think about it, the only thing the government was "selling" was our future.

It's all in the wording. By framing this as a "sale," the government makes it appear as if it's just doing a bit of business.

"Sale" is a word filled with positive connotations. When you have a "yard sale", you're being frugal, getting rid of some excess knick-knacks and bringing in some extra cash. When a business "sells" more, it's doing well. Sales are good - good for buyers, good for sellers.

Except selling bonds isn't like selling stuff at a garage sale. When you "sell" a bond, you're really issuing an IOU. All you're selling is a claim on the government's future revenues, a share of everyone's future taxes, a right of ownership on future oil revenue streams - yours, and your kids'.

Now, I'm not opposed to new debt in principle. New debt can be good - if you use it for things that create value in the long term, like improve our roads, building schools or advancing technology. Those are all assets that will presumably lift the country's potential GDP and raise productivity, and all of them may justify going into debt.

But that's not what is going on here. Most of this money will go to pay for current government spending, things like salaries, subsidies, and military purchases. The money will end up in the hands of people who will, sooner or later, want to convert it into dollars and take it out of the country - either through the permuta market, or indirectly, by buying imported stuff that does not help the country's productivity, and has to be financed with dollars. And the bonds themselves are convertible into US dollars, which means the buyers will sell them in New York for cold, hard greenbacks.

This supposed "sale" is, in reality, a massive uptake of debt for the sake of the powerful. The government is borrowing so the rich, the almost-rich and the well-connected can buy cheaper dollars, hold on to them, and perhaps sell them in the domestic market when the economy deteriorates further. The government is taking on debt to appease speculators, most of whom are in the upper classes, and not a few of which are in the Chávez-spawned parasitic crony-capitalist cohort popularly known as the Boli-bourgeoisie.

This being Venezuela, the bond "sale" was about as transparent as a burqa. The government's attempt to explain the details was a disaster and resulted in brokers illegally creating money supply in order to get in on the game. The allocation of the bonds was anything but transparent.

Instead of hailing the government's latest "sale of bonds," we should call things what they are. The government didn't sell anything. Chávez is borrowing in the name of all to pay for capital flight by a few.

I don't think it sounds so pretty when you frame it that way.
by Juan Cristobal