The people get shoved under the table 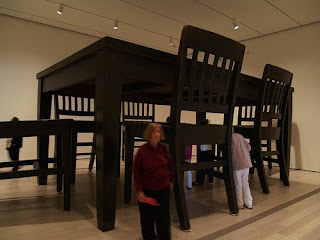 Juan Cristóbal says: - A few days ago, Venezuela's opposition announced with much fanfare it had finally reached an "agreement" on how to select candidates for the looming parliamentary elections. The announcement, praised as a positive development, instead sucked the air out of the room. The agreement amounts to the death knell of a nationwide opposition primary next year.

The text was put together by the opposition parties' quasi-umbrella group, unhappily named the Mesa de Unidad (literally, "Unity Table"...). Careful about its comas and couched in language that could only stir a vogon, the text centered on solving the problems of the opposition political class, not of their voters.

As much as it claims to represent the opposition universe, this "table" lacks a few important things: a webpage, a coherent image, and, more importantly, an important group of civil society groups led by Leopoldo López, among others. So right off the bat, serious players in our opposition fauna are not included, putting a big fat question mark over the table's legitimacy and the impact of anything it does.

What this incomplete assembly has done is approve an unwieldy compromise where some parliamentary candidates will be chosen via smoke-filled room haggling consensus, and those that can't be haggled over successfully will be put to a primary vote next year.

What that means is that the mesa's announcement kills the one truly transformational idea on the table, the one proposal able to not just settle the opposition's unity and organizational problems but to re-brand it as a modern, forward-looking, even daring and innovative force in National politics: a nationwide primary.

Instead of viewing popular participation in decision-making as a matter of principle, the agreement relegates primaries to the status of "last resort", just the thing you do when you've argued yourself hoarse and aren't getting anywhere. Voters like you and me are denied a voice, but parties-in-paper-only such as the MAS get a seat at the table. It's clear primaries are the last thing on the mesa leaders' minds, a mechanism they'll be dragged to kicking and screaming after all else has failed rather than an opportunity they'll seize with any kind of strategic vision.

Primaries are to the table like divorce is to a marriage.

What about the rest of the agreement?

Well, there's nothing there. After weeks of talks, most of the important decisions have been postponed. The rules for the fabled "consensus" have yet to be established, and they're giving themselves 15 days for the fifty (yes, 5-0) political organizations around what must be a truly massive table to agree them.

They claim that, by February, they'll have a clearer picture of where they've reached agreements and where they'll need to go to primaries. The actual primaries would take place in April at the latest, and they vow to have a complete roster of unity candidates by April 30th.

The table seemed rather pleased with itself over this agreement, or at least tried its best to present it as some kind of breakthrough. But they're sadly deluded. They're confusing a timeline with a deadline, establishing no enforcement mechanisms and giving no sign of real commitment by the table's players. They provided no details on progress regarding the rules and no hints as to how the table plans to incorporate those who have so far not participated.

The table's spokespeople asked for our trust, reminding us that in 2005 they reached a unity roster, but then gingerly papering over the fact that the 2005 parliamentary election was a disaster and that, had we not refused to participate, we would have lost by a huge margin. And let's not even touch how those agreements panned out at last year's regional elections, when picking unity candidates was a simpler proposition and much less was at stake.

The hazy deadlines, the blind faith in mechanisms that haven't worked in the past and the little consideration given to the idea of primaries are all hugely disappointing.

Worst yet, they've again failed to show the slightest hint of imagination or daring, the least shred of strategic vision, or any hint that they're aware of the need to drastically rebrand, reposition and relaunch a movement that even Venezuelans who detest Chávez have come to see as sclerotic and almost allergic to the idea of a strategic vision.

The principle-driven primary, where the people themselves take ownership of the movement to re-establish democracy in our country, has been sacrificed for the benefit of the smoke-filled-room-failure primary, where the voters are frog-marched out to clean up the messes their putative leaders leave in various bits of the Venezuelan map.

Así seguro ganamos...
PS.- Reader GTAC tells me Leopoldo López is on board with this, and he actually met with the Table. So maybe their decisions are more legitimate - but they are still not the right ones.
by Juan Cristobal