Picking up on new memes 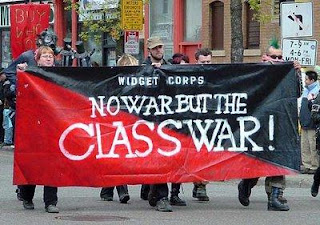 Juan Cristóbal says: - Way back in the early days of 2005, Hugo Chávez declared himself a socialist.

These were the lazy, hazy days of the post-Recall Referendum. The government had consolidated power, and was fresh off a sweeping victory in the 2004 Regional Elections. In the words of then-Vice President José Vicente Rangel, chavismo had the highway "all to themselves."

That was the moment Hugo Chávez decided to amp up the rhetoric.

It's easy to forget, but Chávez didn't say he was a socialist prior to then. His rhetoric was wrapped in a vague, nationalistic, state-centered, pseudo-Bolivarian, militaristic shtick that was hard to define. Only in 2005 did he reveal himself to be a socialist.

We all know what came afterward.

I started thinking about this when, today, Chávez reiterated something he has been saying a lot lately: his Revolution is about "class struggle," about "poor versus rich."

It seems clear this is chavismo's new meme. This is how they will frame the next phase.

Perhaps this is the reason why they are moving against the kleptocrats within their own ranks. Perhaps this explains why Chávez has his sights set on the nations' banks, who have, so far, escaped the wrath of the autocrat and have played silent partners to his policies.

Long gone are the days when chavismo would say there was space in his Revolution for the middle class, when he would try and forge an alliance with the business elite that was willing to work within the bounds of socialism. Will we soon long for the days when he would kid around with Juan Carlos Escotet? There is no space for these shenanigans in class warfare.

The questions Juan Carlos Zapata and others asked ourselves back in 2006 - well worth revisiting here and here - stemmed from the contradiction between the "socialist" rhetoric and the cozy government/business clique operating on the ground.

If so, a lot of people should be shaking in their Ermenegildos.
by Juan Cristobal