[Sorry to stay stuck on the Hong Kong thing, everyone, but I thought it was time to demonstrate I can be obsessed with more than one thing at a time!]

It's day four of the Hong Kong WTO Ministerial and the conference has officially entered the tired-and-cranky stage. Hey, it's not me saying it, that's how the Deputy US Trade Representative put it at her press conference today. In her view, you need to get to this point before people start negotiating in earnest. If so, we're primed for some earnest negotiatin', cuz tired-and-cranky fits the atmosphere here to a T. 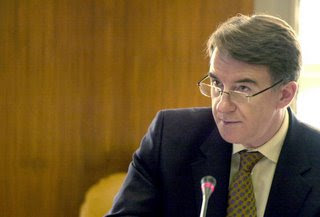 Fact is, nobody is really expecting a breakthrough here today. It's now painfully clear that the EU is just not going to improve its offer, and its offer is very far from acceptable to the developing country block. It's not that Peter Mandelson, the EU Trade Commissioner, doesn't want to sweeten the deal, it's that he can't: the whole institutional structure of the European Union conspires against it.

See, unlike all the other negotiators here, his crankiness Peter Mandelson is not a minister. He's more like a gofer for the 25 EU trade ministers, who are the ones who ultimately get to set EU trade policy. The ministers meet, they set out a harmonized EU negotiating mandate, and they hand it to him. The EU mandate itself is the outcome of a long, difficult, involved negotiation between 25 very different countries with very different interests. By the time the 25 have worked out a common position, there's basically no wiggle room left. Mandelson can't change even the details of the EU's offer without upsetting the delicate balance embodied in the mandate: take out one comma here and the French throw a fit, switch a "shall" to a "should" there and the Hungarians go ballistic.

So there's a strange imbalance between the way the EU "negotiates" at a WTO ministerial and the way everyone else does. When the Australians and the Americans sit down to discuss State Trading Enterprises, for instance, both sides have leeway to explore creative solutions to their disagreement. They can haggle, they can give and take, they can explore different possibilities. But the EU can't do any of that. When Mandelson walks into the negotiating room, all he's really allowed to do is restate his mandate. Which is why I put "negotiate" in scare-quotes above: the EU doesn't really negotiate at all at these things. It reiterates. Often at great length, and with some top grade spin, granted, but its underlying position never changes. As I'm sure you can imagine, this is incredibly frustrating for all the other delegations.

Certainly, things have come to a head when the Financial Times, the FT ferchrissake, is running stories about the EU facing "near-total isolation" in the talks.

At one of the press conferences today, one journo who'd obviously reached the tired-and-cranky stage asked the French trade minister what the point is of even having ministerials if the EU can't and won't change its offer. The guy answered, a bit lamely in my view, that at least the other countries know that it's a credible offer since it's been pre-approved by all the EU member governments, whereas anything the US offers could still get shot down when it goes up for congressional approval in Washington. Perhaps. But it remains hypothetical because, as long as the EU remains lost in its own private bureaucratic laberynth, there won't be a trade agreement for the US congress to vote on.
by Quico