The Antidote to Decency

Talking to Europeans about Venezuela, I find that one of the hardest things to communicate is chavismo's utter lack of common decency. Sure, if you follow the papers every day, it's easy to grasp. But for people coming at it from the outside - say, the idealistic young things heading to the World Social Forum in Caracas - Chavez's passionate, redemptive discourse seems so straightforwardly decent it's hard for them to quite grasp the ethical black hole at the heart of the regime. People, in my experience, actively resist believing it.

Nowhere is the government's ethical turpitude clearer than in the Fiscalía, Chávez's putrid play thing of a public prosecutions service. Run by Former Vice-president Isaias Rodriguez, one of Chavez's most slavishly accomodating yes-men, the Prosecutor General's Office has

systematically plumbed the depths of political dirty tricksterism. Serving as both an implicit guarantee of immunity for loyal chavista criminals (who have to get caught on videotape killing people before they face any risk of prosecution) and as a cudgel to intimidate dissidents, Isaias' fiscalía is the biggest culprit in the ongoing collapse of the rule of law in Venezuela today.

And nowhere has the extent of Isaias' sheer mendacity been clearer than in the increasingly bizarre Danilo Anderson murder investigation saga - which over the last three months has become a kind of distillate of chavista dishonesty. Yesterday, we learned that Isaias's "star witness" in his effort to incriminate key opposition figures - a guy we already knew was a compulsive liar with a string of convictions for identity fraud on his record - was actually serving jail time in Colombia at the time he claimed to have been in Panama plotting to kill Anderson. 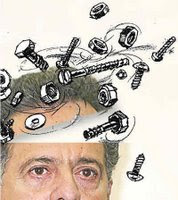 a Globovision report last night. Is it any coincidence that just days ago, Isaias was threatening a wide-ranging investigation into any news reports casting doubt on his version of the Anderson case?

Folks, the Anderson investigation is like a bucket of shit: you can dig down through it as much as you want, but all you find is still more shit...
by Quico