Yes, I know that by even touching on this subject I'm only taking the bait, playing into a crass ploy to distract attention from much more important issues, etc. etc. etc. I know that, really. But this whole absurdist little play over Venezuela's coat-of-arms is really a provocation too far. 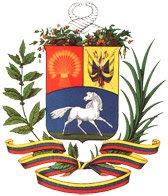 Just to recap: some weeks ago, Chavez mentioned in passing that his youngest daughter, the adorable 9-year old Rosinés, had asked him why the horse on Venezuela's official coat-of-arms is shown headed to the right with its head turned backwards, and suggested it would be better for it to be pictured galloping to the left. Kids can be so cute! As for dad mentioning it to a national audience, well, we've gotten used to these kinds of folkloric digressions in Chavez's speeches. They're usually mostly harmless, and by now we just tune them out.

The little annecdote was silly enough for satirist Laureano Marquez to write a funny column about it in Tal Cual, gently noting the way it seems only Chavez's kid is allowed to criticize him. The first sign that the story wouldn't just go away came a few weeks later, when the National Council for the Protection of Children and Adolescents opened an investigation against Tal Cual for running Laureano's piece, rapping the paper for dragging a kid into the political arena. It seemed like a fairly sycophantic over-reaction, but to a certain extent, you could see their point.

But Tuesday this idiotic little saga took a totally bizarre turn when the all-chavista National Assembly met for the first time and, in its first decision, actually voted to adopt Rosinés's suggestion, officially changing the coat of arms to conform to her cute little idea. I know, it seems made up, but they really did it!

There's soooooo much that's soooooooo fundamentally fucked up about this whole thing it's hard to know where to start. The episode speaks volumes about the debasement of Venezuela's institutions in the Chavez era, about the increasingly unrestrained cult-of-personality around the guy, and just - God, how to even express it - just the wholesale surrender of common sense in the Chavez movement, the fantastical extent of his followers' determinition to debase themselves to prove their allegiance.

A few things to note:


I just don't understand how episodes like this one can fail to set off alarm bells for first-world lefties, at least those endowed with a modicum of common sense. Granted, we've seen a lot of barely believable lows over the last seven years, but the day the president's 9 year old started making national policy...man, this has to be one of the lowest...
by Quico