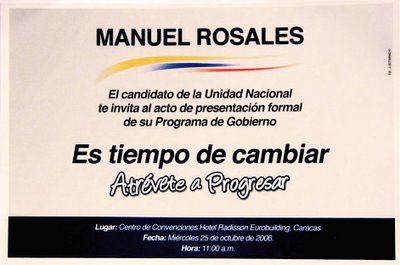 JayDee says: Manuel Rosales made a formal presentation of his Government Program yesterday in the Caracas Eurobuilding. There was no Q&A session for journalists, and he left right after the speech.

Here are some of the highlights:

“Mine will be a completely new government, run by talented professionals.”

“On December 4th, we will have a new opposition, one that will play a role in the decision making process of whichever government.”

“On December 4th, we will have a new Assembly National, and it will respect the necessity of minority representation in the government.”

“I don’t want to be a government that controls all the power; I want my government to have limits on its authority.”

“We should have elections every four years, with a single re-election. 8 years is more than enough for a President to carry out his vision.”

“We will respect private property, from the smallest homes, to the largest businesses.”

“We will respect the professionalism of the armed forces.”

“Our first act will be to de-centralize the authority of the President, so that the Governors and Mayors of Venezuela have more of a say.”

“We will have a foreign policy that encourages regional integration while it defends the interests of Venezuelans.”

“I will be the first Venezuelan President to really preoccupy himself with the well being of our environment.”

“We will construct 1.5 million homes in my administration.”

“We are going to eliminate all politics from our schools.”

“I am going to subsidize the agricultural sector, so that our farmers stop giving away what they grow to other countries.”

“I don’t have any owner; I am free of any previous attachments. I will govern myself, as my own boss.”
by JayDee