Mi Negra: It’s not about growth!

You know, the dangest people seem to read Caracas Chronicles. Today, we have a guest post on Mi Negra by Omar Zambrano, a Venezuelan economist working in Washington, DC 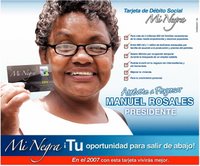 Omar says: Mi Negra, Manuel Rosales' flagship social policy proposal, has generated an intense electoral debate. Unfortunately, discussion on its potential economic and development impacts has been rather scarce and shallow. With some crucial features of the scheme still unclear or unrevealed, particularly those related to the ultimate beneficiaries and the conditions attached to the handouts (as well as some still fuzzy financial sustainability issues), I'd say we can reasonably characterize the Rosales' proposal as a Venezuelan variant of a Conditional Cash Transfer (CCT) mechanism, which is a handout to a targeted set of households (e.g. the poor, the poorest of the poor, the unemployed) contingent on a given behavior (e.g. children's education and health, home improvement, etc.).

The question of who will benefit is an important one: the economic impacts of more targeted mechanism like a CCT, can differ radically from proposals like the one presented earlier by Julio Borges.

Just for background, this sort of anti-poverty program has been used with considerable success in the region since the early 90's. The idea has been replicated elsewhere in the developing world. As trivia, I was surprised to find out that a program whose earliest precedent can be traced in Venezuela (the Beca Escolar, 1989), now is being considered even in the most conspicuous city of Mr. Danger's empire.

First off, lets be clear: I really don't think we should judge Mi Negra in terms of its effects on growth. Don't get me wrong. I'm sure that Mi Negra would have huge growth implications, and I'm pretty certain those effects would be positive. But growth considerations should not take center stage in discussing an instrument designed to achieve something else: to fight poverty and exclusion.

As I told Quico privately, we economists are trained to think you need as many public policy instruments as you have public policy goals. In a world with multiple objectives, you will need multiple instruments. Policy makers should aim to maximize social welfare, not growth rates. If we agree that Mi Negra is the best instrument for poverty alleviation, we still have many other instruments to tackle growth objectives like the trade policy, exchange rate policy or oil producing policy, etc.

Having said that, I still think Mi Negra would have a positive impact on growth.

Inequality and growth
The record so far shows conditional cash transfer mechanisms (CCTs) are very effective tools in alleviating poverty and improving equity. And measures that help lessen inequality help to spur growth. Here the evidence is quite robust: in a world of highly imperfect markets, those who do not have enough wealth or social status tend to under-invests or to invest in relatively unproductive activities.

Think of a buhonero using Mi Negra cash to finance the transition from being an informal employee (of the buhonero mafia) to a micro entrepreneur (a buhonero who sell his own stuff). An equity improving mechanism like Mi Negra would be efficiency enhancing in the sense of helping to reallocate resources from low-productivity activities to high productivity activities (see World Development Report 2006, Ch.5).

This idea may also hold at the aggregate level. Some authors find evidence that decreased inequality may be related to improved growth rates in poor countries. The argument, in brief, is that Mi Negra could help to raise investment rates, and better investment rates can lead to better growth rates.

Human Capital Accumulation
Provided handouts are attached to some conditions, CCTs have been highly effective increasing the, acquisition, accumulation and access to human capital (which is more education and better health) for the children of beneficiaries. Rigorous studies of Mexico's Progresa/Oportunidades program, Brazil's Bolsa familia and Colombia's Familias en Accion, among others, show clear improvements in the educational achievement and health levels among those targeted by the programs. The effect of human capital accumulation on growth is a well studied and verified phenomenon, now in the mainstream of growth theories. In the 1980s, this theoretical advance was called the endogenous growth revolution - but I can assure you, it's exactly nothing at all like the Nucleos de Desarrollo Endogeno.

Empowerment, transparency and accountability
For certain, the effects in this area are the more important ones. I will paraphrase here my friend Rei, another loyal Caracas Chronicles reader: Mi Negra is the first public policy idea we've seen that openly challenge the distributive model that has been in place in Venezuela since the discover of the Barroso II dwell in 1914. The proposal is absolutely liberal: it gives control over oil rents over to the individual, not the state apparatus.

So the proposal will enhance the incentives for the public to closely monitoring the actions of the State and the oil industry, and generate demand for transparency and accountability in the oil industry, strengthening the checks and balances over the system. Empowerment is the name of the game. As long as Mi Negra leads to a more efficient, transparent and accountable state, we can expect gains in the growth perspective of the country. The evidence here is quite robust as well.

So, can Mi Negra serve as the desperately needed growth engine for the Venezuelan economy? Probably but, perhaps not. If it doesn't, does that make it a bad proposal? Not at all.
by Quico