Keller's poll is not a voting intention poll

Quico says: Well, a kind soul leaked Keller's slides to me. As suspected, the 52-48 number is not the result of a standard, "if the election was today, who would you vote for?" type question.

What Keller does is segment the electorate according to their views on issues related to the government's line. This slide gives you a sense of the line of questioning he's using: 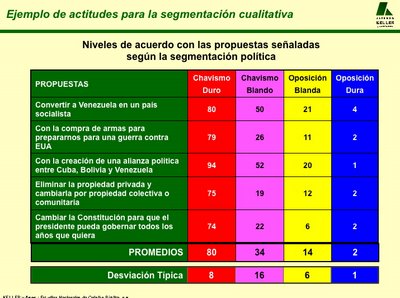 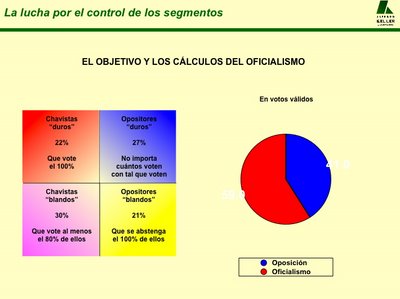 Thing is this is really a screwball, non-standard methodology. When you ask people the long-established voting intentions question ("if the election was today, who would you vote for?") you find that many people who Keller classifies as "softcore opposition" do not say they would vote for Rosales.

It's more realistic to think of that 48% as the universe of "persuadable, potential Rosales voters." It takes some bravado to just assume all of them will automatically line up behind Rosales.

The people Keller is tagging "softcore opposition" seem to be the people most other pollsters define as NiNis. It's far from certain they will end up voting for Rosales. In the end, what Keller shows is what all the other pollsters have been showing. About half the electorate will vote for Chavez, about 30% will vote for Rosales, and the rest are to-be-persuaded. The Josés of the world.

The overall story hasn't changed: Rosales has to sweep that "to-be-persuaded" demographic and win over a few softcore chavistas to have a chance. Keller's poll does nothing to persuade me he's getting there.
by Quico