"If anyone forgets we're in the middle of a Revolution, we're going to beat it into them: this company stands with Chavez."
-Rafael Ramírez, PDVSA chairman and Minister of Energy and Mines

Quico says: More and more, Rafael Ramírez's speech to PDVSA management has made me think about the way chavismo uses the word "revolution" to flatten the distinctions between state, government, homeland, pueblo and leader - conceptual distinctions vital to a free society.

It makes no sense, within a revolutionary mindframe, to posit a distinction between Chavez's interests and the interests of the people, the homeland or the state: they're one and the same. In fact, that unity is what the word denotes, its deep meaning.

Which explains why chavistas, when they read Article 145, don't see what you or I see. They read the same words we read, but what they understand is different: "public employees are at the service of the Revolution and not of any partiality."

In a Revolution, state = government = homeland = people = leader. If you accept that, it follows that dissenting from the leader is tantamount to treason against the state. Once you've conflated these ideas into a single, undifferentiated soup, you pull out all the conceptual stops that restrain a government from tyranny. In this way, the word "Revolution" has become a trump-card, a conceptual bulldozer plowing over all spaces for legitimate dissent. 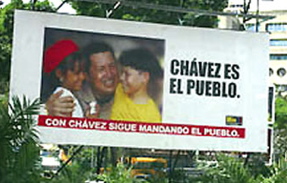 Anything short of total, unthinking support for the Revolution makes you an enemy of the people. Your conscience doesn't belong to you, it belongs to us...well, to him. And if you hold back, even a little, if you don't quite surrender your will in its entirety, you become suspect, an enemy to be liquidated.

It's a road that leads to tyranny, and nowhere else.
by Quico