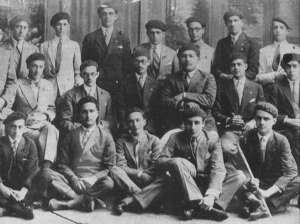 Quico says: My earliest political memory is of my grandfather's ankle.

I couldn't have been more than 5 or 6. I was playing on the floor in front of him, running a matchbox car across the floor - vrooooom! As I ran it up his leg, I noticed something strange about his ankle. It looked weirdly bumpy, indented, just wrong.

"Grandpa, did you make a booboo on your ankle?"

"Nah," he said nonchalantly, "those are just the marks from the shackles, from when I was in jail."

His answer confused the hell out of me. Partly because the word for shackles in Spanish - grillos - is also the word for grasshoppers, so the image that popped into my mind was of insects gnawing at his ankles in some fetid prison. Mostly, though, what I couldn't put together was what the heck my grandpa had been doing in jail. I was too young to really understand my mom's explanation later that day. In fact, it was years before I was finally able to grasp what those marks meant.

As it turns out, my grandpa was just a high school kid in 1928, when he joined the first wave of student protests against the Gómez dictatorship. Like the rest of the protesters, he was tossed in jail for his trouble, chained to a wall for weeks alongside the likes of Jóvito Villalba, Miguel Otero Silva and Raul Leoni.

It's an experience that marked him, quite literally, for the rest of his life. Even though he didn't end up going into politics, my grandpa never forgot the difference between tyranny and freedom he learned in Puerto Cabello. "Democracy" and "freedom" meant something deeper to him, something more vital than it could ever mean to someone who's only read about democracy in books, or thought about the loss of freedom in the abstract.

I've been thinking a lot about my grandpa's ankle this week. About his sacrifice. About what those shackles did to him. Was it all in vain?

In 1928, it sure must have seemed like it. As every schoolboy knows, the protests of 1928 didn't really weaken the Gómez regime. He crushed the protests easily, eventually exiled the leaders, and remained in power until the day he died. If blogs had been around back then, we would've had to call it a monumental blunder.

And yet, those protests are remembered as a pivotal moment in Venezuela's 20th century history. It was those hapless kids, acting without a real plan, without a real notion of what they were up against, those kids whose efforts must have seemed so pathetic to Gómez as he crushed them, it was those kids who ended up dominating political life in Venezuela for the next half century.

The bonds they made while chained to that wall, the esprit de corps they forged amid a struggle over transcendent values, shaped Venezuela's political future in ways people could scarcely have imagined in 1928.

Something to keep in mind as we see Venezuelan students once again jailed for protesting out of rage. Will they bring down the Chávez government? Of course they won't. But the lessons they're learning this week, the ties they're forging, the values they're affirming...those will stay with them for decades to come.

Today's detainees, tear gassed and harassed, beaten and humiliated, will be our newspaper editors, parliamentarians and ministers over the next thirty, forty, fifty years. When they meet each other, they won't need words to evoke the memory of what they're experiencing this week. And once they're in power, the lessons they're learning right now about freedom of speech, civil rights and the right to protest are lessons they won't forget.

I admire them, I really do. And while I do think that, in the short term, their efforts are doomed, I realize it's not sensible to judge them on that kind of time horizon. More likely, it will be another half century before the deeper consequences of this week's protests have fully worked their way through Venezuela's public life.