Did Chavez turn a defeat into a victory? 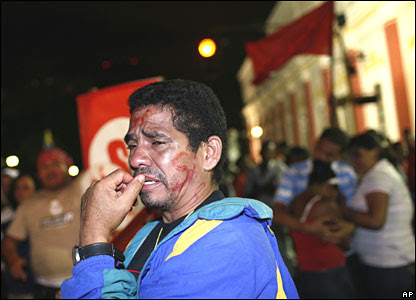 Quico and Katy say: A few days ago we posted our No victory scenario. We thought Chavez would work to turn defeat into some sort of publicity victory, something he could build on for the future by portraying himself as a victim or by bringing back the "conciliatory Chavez" that's been missing these past few years.

Last night, our first reaction was that he'd nailed his concession speech. His sounded like a real democrat, soft-spoken if a bit winded. And while it's generally considered rude to give a concession speech that lasts more than a few minutes, this is Chavez we're talking about, so we just thank our lucky stars he didn't drone on for four hours.

But thinking back on it this morning, we realized how mad that speech made us. Is it just that the guy gets under our skin, or is there more to it than that?

And then it suddenly hit us: his tone conciliatory, but his message wasn't. He wasn't raving at the top of his lungs like he usually does, but what he had to say was no less aggressive for it.

The essence of Chavez's concession speech was: sod the lot of you, I'm gonna do it anyway. If what he used to call "the sovereign people" don't like his constitutional reforms, that's neither here nor there to him: sooner or later, one way or another, he'll get there.

He offered his supporters no explanations for why he failed at such a critical juncture. He shed no light about why he lost what was, in his own words, was "the most important election in our history", one meant to mark the revolution's future. He had no particular insights on what it says about his ideological agenda that a popular petrocrat could lose a referendum against a bunch of adolescents at a time when oil fetches more than $90 a barrel. He had no answers, only tunnel vision. If there was a message from the voters in there somewhere, he just plain missed it.

In this context, "reflecting" probably means finding somebody to blame. There was no indication yesterday that Chávez had the slightest clue as to where to begin reflecting on what had happened, or any intention to respect the underlying decision the voters have made.

The 99 Constitution seems to be the only thing most Venezuelans can rally around now.

Legally, Chavez never had the right to subvert it. Now, he doesn't have a political mandate to do so, either. But does he care? How long could it be until the next time he hits up the Central Bank for another "millardito" in "excess foreign reserves"? How many times will we have to reaffirm the Constitution before he realizes we're serious?

We also think Chávez made a critical mistake in not addressing the legions of followers standing outside the very palace where he was giving his speech. The photos you can find in both the New York Times and the BBC website speak volumes about the heartbreak of his devoted followers on hearing their beloved leader had lost an election for the first time.

Used to seeing him celebrate on the "Balcony of the People", the "people" were left wondering why they weren't invited to his speech this time around. When they needed solace, he left them hanging...not for the first time.

More and more, Chavez is looking like a fat man in a palace, unaware of and unconcerned with normal folk's problems, let alone their views. Try as he might to cover it up, his larger than life persona is well and truly punctured.