A city is made of fragments. It is made of the memories we share as a community. Although individuals use, perceive and understand the city differently, there are common experiences, urban events that make the cities we live in, the cities we live in. It is hard, for instance, to picture the city of Caracas without the constant presence of the Parque Central towers in our midst as an urban landmark.

It is common to a lot of different perceptions and ways to use the city and it is a huge part of the quilt work that comprises the city of Caracas. A better example is the Avila Mountain which pervades collective consciousness of the city of Caracas and that of its individual inhabitants. Caracas cannot be understood and or experienced without the Avila because it serves as background and common thread too all our narratives. It is indeed what makes Caracas what it is.

Disclosure: I studied 10 years in a school that was smack dab in the Avila?s foot. I was never a climber or hiker, but I loved sitting around the school?s yard and watch the unobstructed view of the Avila the school had, for hours and hours.

Cities, of course, are affected by its inhabitants and their circumstances. Cities rise, grow and fall mirroring the destinies of their dwellers. And politics, especially political strife and war (which is no more than diplomacy gone wrong) affect cities in ways that are not always predictable. Beirut, Berlin, Havana amongst a long list of cities, are prime examples of how war and/or politics can affect a city to the point where those common narrative threads that give cities their texture and depth are simply obliterated or affected in such ways that any notion of the same city ceases to exist or is at least cast into oblivion. Berlin for instance spent at least two thirds of the XXth century being first capital to the Nazi State, then war prize for the Allied Forces and lastly more than 30 years as two completely different cities divided by a very real, very absurd and abusive act of political confrontation.

One Berlin became a recluse center of power for a Soviet proxy regime with the worst Political Police known to man after the KGB; the other one became a virtual island of capitalism in a sea of collectivist nightmares, it was indeed a billboard for the western way of life. The fall of the Berlin Wall, and the subsequent reunification of Germany presented Germans with a very curious situation: a single city so deeply torn, that it took years for people to accept the very possibility that they were all Berliners in the end.

Beirut still bears to this day the scars of a confrontation of decades between different factions of what was a very civilized francophone country torn from within by religious extremism. And Havana which once was the Bordello of the Caribbean has become after decades, well, the Bordello of the Caribbean. The clientele and the reasons behind prostitution have changed, but seems to be stuck in time: 1950's time. Well, a very distressed 1950's time. In fact, Havana seems to be crumbling under the pressure of its own failure, or should I say the failure of its tyrannical political model. Havana seems to be paying a revolutionary punishment for its dissolute fame in the arly 1900's. 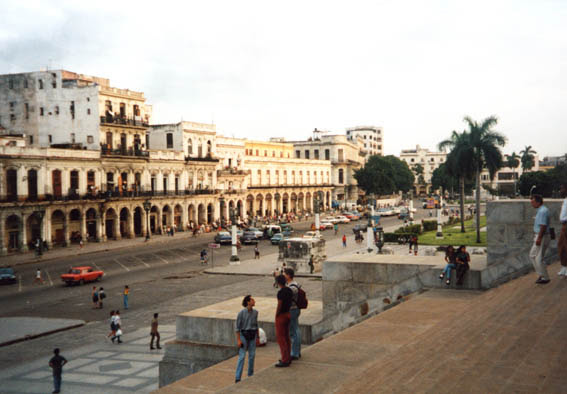 I'm not implying, by any means, that Caracas was a perfect city: it was unsafe and violent, traffic was always terrible, and the city was a patchwork of crappy half-assed solutions to problems, addressed without regards for consequences.

Despite all of that, Caracas was "La Sultana del Avila" and "La Sucursal del Cielo". It was not perfect, but it was somewhat liveable. We cannot blame this decay solely on chavismo. It would be stupid to overlook the obvious responsibility of previous administrations, but under no other government had we been robbed of so many urban icons and common spaces that were once the playgrounds not only of the Venezuelan ?oligarchy? as Chávez likes to call everyone who does not agree with him, but by the disenfranchised poor he?d like to convince of his dedication. There are virtual walls in Caracas that have become quite real. They have even transmutated into barbed wire and armed soldiers, or into unruly groups which attack any person, group or thing which does not fit into their molds of revolutionary purity. Plaza Venezuela, the Plaza Bolivar, amongst others have become the turf of violent mobs and gang wars for domination of whole zones of the city.

I propose we take a deep look at ourselves, and decide if we want let this madness go on. I propose we steal this city back from them and make it liveable once more. Even if it takes destroying the Wall that crosses Caracas in all directions and separates the city that is from the city it could be.