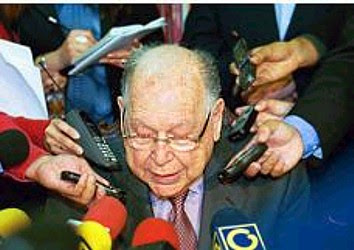 The Moral Council unanimously decided to declare admissible the request of qualification of serious offense interposed by the deputy of the National Assembly, Ismael García, against Alberto Martini Urdaneta, Rafael Hernández and Orlando Gravina because of the sentences through which they declared fitting the request of a caution measurement and admissible the demand of nullity, interposed by leaders of the main opposition parties against the repairs of signatures that endorsed the president revoking referendum.
The Moral Council declared that these justices acted with serious and inexcusable ignorance of the constitution, the law and the right and diminished the fundamental principles set in the Constitution. He added that on the 11th of May 2004, the three Justices were notified of the process against them and were asked to submit writings of their respective defenses.
Urdaneta, Gravina and the Hernandez responded and alleged, among other aspects, that the Republican Moral Council was incompetent to know the interposed requests because it is not a jurisdictional instance superior to the Judicial Power and it is not a disciplinary board nor has it power to punish; that the caution measurement dictated by the Accidental Electoral Court was according to right and that this Court had competence to know the electoral contentious resource interposed by the deputies César Pérez Vivas, Henry Ramos Allup and others.
In view of the pleas of the aforementioned justices, the Republican Moral Council argues in his decision that articles 265, 273 and 274 of the Constitution attribute to the Citizen Power the qualification to categorize serious offenses by justice men or justice women of the TSJ, which is also established in articles 1, 2, 10, 11, 29, 32 and 33 of the Statutory Law of the Citizen Power, valid from the 25th of October of 2001.
On the essence of the matter, the Moral Council emphasized that, with its decision, the Accidental Electoral Court broke the independence between the Public Powers, since it not only suspended the regulatory norms of the CNE, but substituted it to dictate rules on validation of signatures that are the exclusive responsibility of the Electoral Power.
(Translated by Pedro)
If it is confusing you can read Francisco's posts about the justices here and here.