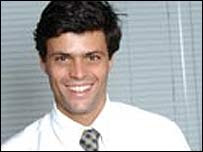 Katy says: Leopoldo López is the brilliant, popular, telegenic Mayor of Chacao and one of the opposition's most promising politicians. We haven't talked about him in quite some time, but we should, because he is apparently the overwhelming favorite in the race for Caracas Mayor.

Leopoldo is also in a heap of trouble. As it turns out, Clodosbaldo Russián, Chavez's Comptroller General, decided a few years ago that due to some alleged shenanigans that Leopoldo was supposedly involved in - charges for which he was never tried, never sentenced and from which he was never able to defend himself in court - he is not eligible to run for any office until 2012.

Regardless of the merits of the case, the way it has proceeded has been grossly unfair. No individual bureaucrat should be entitled to strip any Venezuelan of their political rights without the issue being vented in a court of law, and the allegedly illegal acts that are motivating this measure have not been proven either.

Here is my translation of what the article says:

"Article 65.- People who have been found guilty of crimes comitted during public service and of other crimes that affect public property, cannot be candidates for positions selected by popular vote for the period of time specified by law, starting from the moment the person begins serving his or her sentence and in accordance with the gravity of the matter."

I'm no lawyer, but to me the article says that if you have been found guilty you cannot run. It doesn't say this is the only way somebody can be stripped of their political rights, which seems to be Leopoldo's argument here.

It's Logic 101 folks. "All whales are mammals. I am not a whale, therefore I am not a mammal."

Leopoldo's strategy makes no sense. Someone needs to point this out to him.