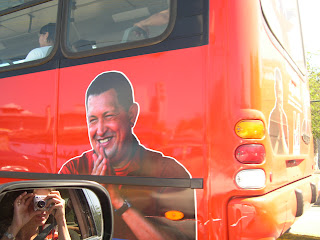 Katy says: New York Times columnist Maureen Dowd is not my favorite. Still, I make it a point to read her since a lot of people do. Sometimes, when she's good, she taps into what many people are thinking but haven't really said before.

This week Dowd picked on one of the reasons why Hillary Clinton's campaign seems to be floundering. She claims that Clinton seems desperate to reinvent herself all the time, conveying to the voters in the process that either they don't know her that well or, worse, that she doesn't know who she is or who she wants to be.

For example, she says,

"The fact that Obama is exceptionally easy in his skin has made Hillary almost jump out of hers. She can’t turn on her own charm and wit because she can’t get beyond what she sees as the deep injustice of Obama not waiting his turn. Her sunshine-colored jackets on the trail hardly disguise the fact that she’s pea-green with envy.

Just as in the White House, when her cascading images and hairstyles became dizzying and unsettling, suggesting that the first lady woke up every day struggling to create a persona, now she seems to think there is a political solution to her problem. If she can only change this or that about her persona, or tear down this or that about Obama’s. But the whirlwind of changes and charges gets wearing."

Take Manuel Rosales, for example. I think one of the key mistakes that Rosales made (and continues to make) is that he wants to copy some of the things Chávez does in ways that appear non-sincere.

It was perceived as an insincere pledge, like Rosales was pandering.

The issue of the use of public funds for personal promotion is a good example of how opposition politicians confuse the voters. This has long been a pet-peeve of mine, and it should be yours as well. It is an egregious show of corruption, one that says "look what I can get away with, in your face!"

Chávez and his minions have long used this tool. But the reason it doesn't backfire on them is that they are completely unapologetic about it.

When Rafael Ramírez, the PDVSA President, was caught in a clandestine video telling state workers that they all had to vote for the President, Chávez didn't apologize. He basically said "that is who I am, deal with it." Attempts to turn this episode against him backfired. In hindsight, this bold-faced strategy was brilliant.

Maracaibo is one of the places where these low-level political tactics are mostly used. Street signs are enormous and they all have some political figure's face painted on them. As you drive through the city, brightly colored red buses pass you by, painted with the faces of the mayor and the President lest you forget who you need to thank at the ballot box for that comfortable ride to work. 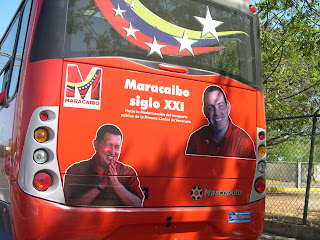 I was writing a post in my head railing against this when I realized I couldn't, in all honesty, blast Chávez for this particular offense without bringing to task Manuel Rosales for doing the same thing. True, Rosales' ads are not as pervasive, and his picture is not used as much as his name. Yet that may be more a reflection of the State government's budget constraints than his philosophical respect for institutions. 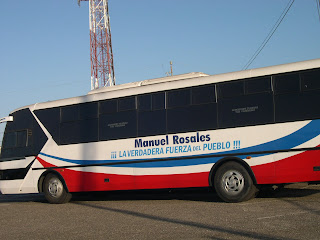 This is illegal, wasteful, counterproductive and devoid of content. After all, what does "the true strength of the people" actually mean? That Rosales is a strong leader? That he is backed by the people? That bus makes me want to vote less for Rosales, not more.

What this reflects is an identity problem. If Rosales believes that this is an acceptable way of doing politics, then he is not as different from Chávez as he claims to be. If he doesn't believe in it but thinks he has to do it because Chávez does it, then he doesn't really know who he is. Either way, it conveys weakness and insecurity, two traits you don't want in a leader.

Think about that the next time you fly out of Maracaibo. Think about why it is that right there, in the stub for the airport tax you just paid, there is a message from Manuel Rosales wishing you a merry journey.

Think about how long it's been since we had a national politician in the opposition who was truly comfortable in his or her own skin. 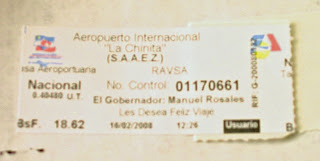