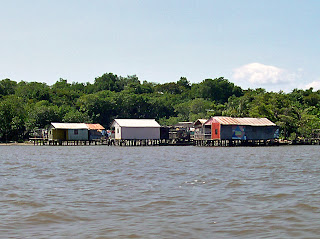 Katy says: "That one over there, that's my mother's house. The house next to it also belongs to my mother, but she's loaned it to make a Barrio Adentro module. That's where the Cuban doctors work and live."

With these words, Rolando, our boat driver in the Sinamaica lagoon, hinted that he was a hardcore chavista. He's an Añú, one of the several indigenous groups from the Guajira peninsula shared by Venezuela and Colombia.

I took a deep breath and asked Rolando how he had voted on the December 2nd referendum. He said that, after thinking about it, he'd voted "No". While President Chavez had done a lot for his community, he felt what they needed now were jobs, a hospital and better security. He thought the reform would not help accomplish these goals.

I didn't believe him. I was sure he was saying what I wanted to hear. Yes, Zulia tends to lean against Chávez: it has one of two opposition governors in the country and the "No" won in the state by a large margin. But Chávez has an inmense lead in rural areas, especially indigenous ones. I knew I was in red country.

Sinamaica is a unique place. Right in the middle of the Limón river delta's mangrove lagoon, you find a town of 5,000, mostly living in huts built on stilts in the water. The town is poor and jobs are hard to come by, but the mystique of the place remains: it was these houses that Américo Vespucci was looking at when he first blurted out "little Venice!", or, in Genoese dialect, "Venezuela"!

I was visiting relatives in Maracaibo last week, along with a Chilean friend. When I told them we were planning to take our friend to Sinamaica, they warned against it. They said we'd get kidnapped, that the lagoon was dry, that the boats couldn't navigate and that there was a dengue fever epidemic. My relatives hadn't ventured to Sinamaica in quite some time, so their warnings were based on hearsay. With a wee bit of hesitation, we decided to go and headed North.

The day was as cool and crisp as Zulia can get - picture a mild summer day in the North. The boats were there just like they had been the last time I visited this place, twenty years ago. They all had life-vests and a rustic yet functional canvas canopy to shield us from the searing midday sun.

We set off upriver and the beauty of the place started to sink in. While some things had barely changed, others were noticeably different. There is a new hostel in town, next to a brand new school that, according to Rolando, is teaching the Añú about their heritage and their language. The huts have had electricity for as long as I can remember, but now some have Direct TV satellite dishes too.

While a few of the huts had "No" scribbled in graffitti on their walls, I saw a lot of "Si - con Chávez" signs. And while I managed to see a couple of health-care facilities run by the state government, Chávez's presence was overwhelming.

"See," I thought to myself, "this is Chávez territory."

When I got home, though, I was surprised. The place is more complicated than I'd thought. Turns out that the No won in Sinamaica last December, 52 to 48, a larger ratio than in the nation as a whole. Maybe Rolando was telling the truth.

Twenty years had passed since my last visit and the place now looked better, not worse. Schools, doctors, Añú language classes...surely the good burghers of Sinamaica were grateful to the President for all that, right?

Yet there were many signs that suggested something wasn't right. Take, for instance, the road trip. On our way there we passed at least ten military checkpoints. I thought this was usual, but for the people of Sinamaica that has to be uncomfortable.

Not only does the military drive away the tourists, they also hamper the lucrative smuggling business that some of these communities have long thrived on. The National Guard is notorious in Venezuela for muscling in on the trade, so rather than stemming the flow of cheap gasoline across the border, they divert some of the funds away from the community and into their own pockets.

At the same time, the region is notorious for its FARC presence. Some of the people here are large cattle and goat-herders, and small fortunes have been made from this trade. Yet the military presence has done precious little to turn the tide on the many problems safety poses for legitimate businesses such as these.

On our drive up there, we noticed dozens of brand new cars parked along the road with serial numbers painted on their windshields. We didn't know what this all meant, but it made us uneasy. I thought it could be some sort method whereby stolen cars held for ransom are returned to their owners.

Not to be. This is what is called "tripletear", a common way to make money out of the thousands of inefficiencies in Chavez's Venezuela.

Due to foreign exchange controls, it now takes about six months on a waiting list to buy a new car in Venezuela. Some people in the Guajira who manage to score one have figured out a way to cash in on the distortion. They raffle the new car away by posting serial numbers on the windshield on the side of the road. The numbers are a subset of the possible winning numbers of that week's state lottery - if you buy a ticket from the car's owner and the lottery draws that number, you win the car.

When the only local industry that is booming is a makeshift pyramid scheme, people won't be happy. Guajiros want jobs and security just like anyone else, and the Barrio Adentro module is old news.

Rural Venezuela is more complex than I'd assumed, plus it's changing. The government is still very strong, but in the eyes of many, Chávez has turned a corner. And while first impressions can make you think that, yes, things are better now, the few improvements you see are things the locals see as either old news or just unfinished.

It all brings me back to the importance of November's state and local elections. A lot of Chávez's votes from rural areas come because the opposition simply has no presence in these out of the way places. Some towns have probably not seen an opposition politician in years, and it's hard to make credible promises when you've been shut out of local government for decades. In light of the positive impact an opposition local government can have, it seems clear to me that boycotting the regional elections four years ago was a huge mistake. It's a view all but the most extreme slivers of the opposition now seem to share.

When we were getting off the boat, I asked Rolando how to say "thank you" in the Añú language. He was embarrassed to say he didn't know, but added that they're trying to recover their language and their culture with the government's help.

"At least that is what the government has been saying all these years," he said.

He couldn't say "thank you" in his ancestor's tongue, but the disappointment in his tone said enough. 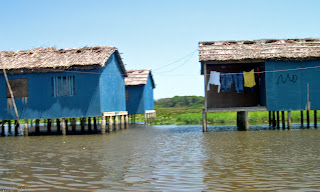