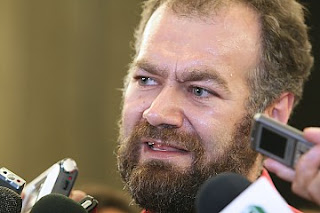 Juan Cristóbal says: - Anyone who has followed chavismo through the years knows that the guy has practically run out of new people to promote. Whenever he shuffles the cabinet, he really shuffles it - Rodríguez Chacín goes from A to B to C, Diosdado goes from E to F to G, and so on. So the meteoric rise of Eduardo Samán to the upper echelons of chavismo has sparked my curiosity. Who is the man behind the beard?

Samán, as you may recall, has gone from superintendent of intellectual property, to head of consumer protection agency Indecu (now Indepabis), to (currently) Minister of Commerce. A notorious media whore, his main merit appears to be an unwavering loyalty to Chávez and the Bolivarian Revolution. Most of all, he also is apparently a hard-core Marxist ideologue.

I asked around and people who have dealt with him call him an honest person but a real fruitcake, someone who thinks the fall of the Berlin Wall was just a blip in the world's unshakeable march to socialist utopia. During his time in the intellectual property office, he was famous for saying that, basically, intellectual property was a misnomer, that anything intellectual had to belong to the collective. And that was the guy in charge of guarding your patents!

As you may recall, Samán was the one who came up with the idea of the "areperas bolivarianas" which, thankfully, have yet to come to fruition. Watch for Samán to continue making news - the guy has the confidence of the President, is committed to the process, does not seem to have a corrupt streak, and is pretty much certifiably insane.

Post 75 of 100 ... any Samán stories you wish to share? This guy is going to be VP one of these days.
by Juan Cristobal