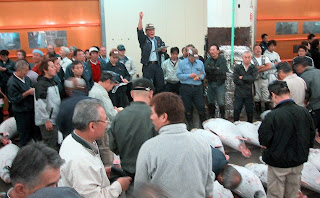 Juan Cristóbal says: Rumors of a not-quite-overt devaluation of Venezuela's fixed exchange rate system continue to swirl. The last few months, there have been suggestions that Cadivi, Venezuela's fixed exchange-rate currency rationing body, was going to transfer some of its sales capacity to the Central Bank. The idea was to allow the Central Bank to sell the dollars banks and stock brokers needed (yes, they're still around) through an auction. The plan, which would create a third exchange market with a higher price than the fixed rate but at a lower price than the parallel market, appears to be on the verge of being implemented.

These rumors have been around for a while. Undoubtedly, the government is feeling the double whammy of having an overvalued currency. When you are the sole provider of currency in your economy and you basically give it way, you are not getting as many bolivars for as you need to keep your petrodollar stash from dwindling. This forces you to ration out the dollars you sell more and more aggressively, making them scarcer and scarcer, and sending people flocking to the parallel market, where the exchange rate soars. This fuels inflation, currently the highest in Latin America.

Shifting from Cadivi to the BCV would allow the government to devalue the currency while at the same time please some of its banker friends. The gist is that Chávez need to OK the deal. Not surprisingly, given how un-socialist it would be to have a currency auction, it sounds like it's a no-go.