So you wanna be the leader of the opposition? 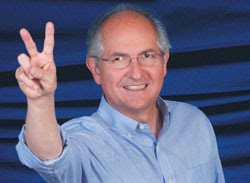 Juan Cristóbal says: - Here are six things you need to do.

MEMO
To: Antonio Ledezma
From: Caracas Chronicles
Subject: How to be an effective leader of the opposition and win in 2012

The following is a laundry list of what you need to do in order to be effective in your new role as "leader of the opposition" and beat Hugo Chávez in 2012.

1. Be the catalyst for a winning coalition in the Legislative Elections. Perhaps it's too late to think we have a realistic shot of winning a majority of the seats in next year's Assembly elections. However, one thing is clear: a dismal showing by the opposition and we will have no chance in 2012. Tagging on to Leopoldo López’s idea of opposition primaries would be nice, specially considering how it's the best idea out there. Oh, and I hate to remind you, but you owe your current job to his misfortune.

2. Bring everyone together. No, this is not touchy-feely crap. This is recognizing the fact that just because Globovisión has anointed you The One, it doesn't mean everyone will follow you. The opposition is fragmented politically, but most of all, geographically. If you want to lead, you have to rally your troops. This means bowing to the Salas Feos, Pablo Perezes and Capriles Radonskis of this world. The sooner you recognize you need those guys, the better off we will all be.

3. Talk about how you are different from the IVth Republic. That will be Chávez’s main line of attack - that you are an old-style adeco, that you are CAP's dauhpin, that you are a político de la cuarta. Well, are you? You've got the street creed with the Maria Alejandra Lopez crowd. Your target audience is now the Ni-ni crowd, the ones that hate the IVth Republic and everything it stood for. Don't be afraid to criticize the past but, most importantly, don't hold back on your ideas on how to do things differently.

5. Play to your strengths. You've shown that you have high ideals. You've taken beatings and resisted a hunger strike for your causes. You have shown uncommon courage when facing steep odds. Play that up.

6. Start now. There's not a moment to waste.

Post 51 of 100 ... feel free to tack your own ideas in the comments board.
by Juan Cristobal